Chicago Hustles Magazine is graced with the amazing talent behind “Cityscape Chicago” by  to talk about his amazing video representing Chicago at night & beyond.

First and foremost this video is amazing, as photographers ourselves we are often severe critics but when we saw this we where in awe LITERALLY.
It is obvious you are a photographer with great skill and ability, tell us when and how your journey as a photographer/into photography began.

Eric Hines: First, I want to thank you guys for getting in contact with me. I’m glad you are fans of the video and I appreciate you sharing it. My journey with photography started almost 3 years ago. The first photos I took with a dslr camera were on New Years 2010 after a snow storm where I live in Indiana. About a year after that, I discovered time-lapse photography and began researching and experimenting with it in the field. I immediately fell in love with the art and have continued practicing it to this day.

What initially inspired you to combine 30k photos into this amazing video of Chicago? You could have chosen any city in the world why Chicago?

Eric Hines: My initial interest in the city of Chicago came long ago as a child. Growing up in Northwest Indiana, I was very close to the city, but didn’t visit often. When I did see the city, it always fascinated me. I loved the fast-paced nature of it, the buildings, and the way it would light up at night. When I started working with time-lapse, I knew I had to start exploring Chicago, so I decided to make it happen during the summer.

Many of these scenes are very breath taking, how did you get to such positions and angles for some of these shots which seem impossible? If you own a jet-pack can we order two lol.

Eric Hines: Haha, thank you. I knew from the beginning of this project that I wanted to film many sequences from above the streets, but didn’t know how I would be able to get access to these massive buildings. While focusing on shots I wanted from more easily accessable locations, I sent many emails searching for people who would be willing to grant me access to these buildings with extraordinary views of the city. I was very lucky to get the help from a few individuals, as well as Hotel 71 and the Hard Rock Hotel. This secured some of my favorite above ground shots in the film.

We hate to ask a Jedi for his secrets but for example at 00:43 seconds it seems like you are just floating in mid-air over the platform how was this effect achieved?

Eric Hines: The shot at :43 was actually done on the walkways crossing the platforms. I was able to set down my tripod for about 15 minutes and grab this shot.

According to Vimeo you posted this video was posted  30 days ago on Vimeo the response has been astounding to this wonderful piece (with good reason). It seems like it cost a ton, what where some of the challenges you faced filming over a 4 month time period to make this happen?

Eric Hines: Yes, it is very amazing how well the film has done so quickly. I really couldn’t have asked for a better treat than to have had so many people view and enjoy it. I funded the video myself, so there were a few challenges keeping it going. Most of the money spent actually went into gasoline to drive into the city from Indiana, and parking fees for my car. Most of the equipment used in the making I already owned, so there wasn’t much cost there. I am very pleased with the project, though, and am very happy I was able to do it.

The whole video showcases mostly downtown, what scene/ minute marker is your favorite in the series of images and why? Did you have help filming this or was it a one man mission?

Eric Hines: My favorite shot in the whole film is at the very end, looking west from the top of the Willis Tower over the buildings and expressway below. It was the final sequence that was shot before I started putting the footage together. The lines from the streets stretching out across the ground and the traffic moving through it were really just incredibly gorgeous to me. My friend Matt Young, a film student at Tribeca Flashpoint, was a great help assisting me with the video. Getting all the equipment necessary to shoot from one location to another can be pretty difficult alone and I would not have been able to do it easily without him. He didn’t just help carry gear, though, he offered another view on my ideas and helped as another photographic eye.

At Chicago hustles magazine we believe that sharing the stories and talents of amazing creative individuals can inspire others. We would like to know how you define the term Hustle?

Eric Hines: I would say Hustle and make it happen. If you have an idea, start working on it. You never know what can evolve from that idea and it could change your life.

Chicago Hustles Magazine would like to thank Eric Hines for taking time out to give us some creative insight on this amazing piece of art.
Thank you guys for having me and sharing the video! I hope everyone enjoys it!

If you need some magic created you can find him here:

Here is the link for my video, Cityscape Chicago 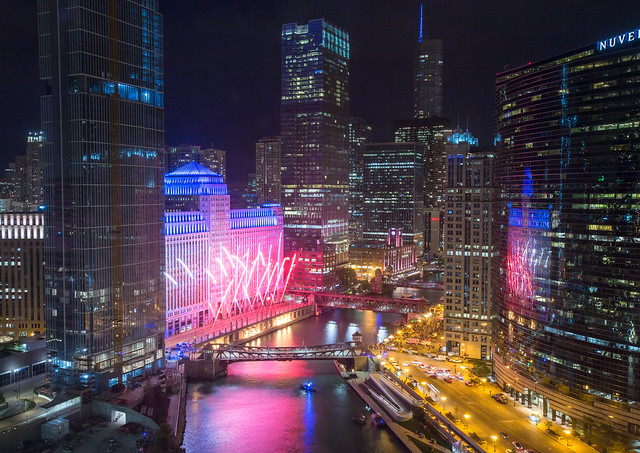